Caviar is the roe from the sturgeon, the world’s most valuable fish. Their naturally protected surroundings have helped them ignore the evolution of millions of years. The Caspian Sea has remained deep and warm, with the sturgeon perhaps our only link to the stimulating, generous tastes and flavours known to our distant ancestors.

Caviar is a capsule of invigorating energy, filled with the proteins, minerals, vitamins and oils essential for life. It is eaten in a completely unmodified natural form, through knowledgeable careful handling and perfect transportation and storage. Sturgeons are harvested “in nature” during the spring and autumn spawning seasons.

There were no international regulations concerning sturgeon fishing and the production of caviar until CITES, the Convention International Trade in Endangered Species, began to regulate all sturgeon trade as from 31 March 1998. Wild sturgeon was prevalent in Azerbaijan, Bulgaria, China, the Islamic Republic of Iran, Kazakhstan, Romania, the Russian Federation, Turkmenistan, Turkey and Ukraine, though only the former USSR and Iran were major historic caviar producers. In Iran, the well-known Iranian State Fisheries Company Shilat regulated the marketing of its three types of caviar: beluga, oscietra and sevruga.

Shilat always air-freighted its caviar in special wooden Shilat boxes of 16 1.8kg tins. Beluga boxes had respective outer markings indicating either “Beluga 000”, “00” or “0”. Beluga sturgeons can live up to 100 years, create large, opalescent greyblue caviar with a delicate skin and a palate-tickling flavour. Oscietra arrived in identical fashion with outer box markings of “Oscietra A” and “Oscietra B”. Living for more than 50 years, the fish was famed for its variegated caviar, traditionally in shades of gold and pale browns. Sevruga also came in wooden boxes with outer markings of “Sevruga 1” and “Sevruga 2”. With a lifespan of 30 years, this sturgeon creates an intensely dark, almost luminous, though small caviar with a strong yet delicate taste.

For centuries now, sturgeons have been caught and have been of the utmost interest from an economic, gastronomic and cultural perspective. To monarchs’ delight, the “Royal Prerogative” guarantees the possession of any caught sturgeons, while the latter’s delectable roe (only called caviar after the salting process) was championed as the ultimate, fitting luxury for kings and queens in those halcyon days. Furthermore, the sturgeon’s meat, which is customarily cured and smoked, established its gastronomic presence back in the 18th century and was popularised as “zakuska” – an elegant Russian hors d’oeuvres that quickly spanned across western Europe.

Wild sturgeons underwent a dramatic decline and became rare and scarce as early as the beginning of the 20th century. They were driven to the brink of extinction, not because of accidents or their failure to adapt to natural changes but as a result of intense human interference, such as the construction of water dams, restricting the sea’s fresh water input, thus impeding the sturgeon’s migrations. remaining water was contaminated by agricultural biocides and industrial wastes.

The pollution of the Caspian Sea, due to oil exploration, further decimated the sturgeons’ prehistoric habitats. The few surviving adults subsequently face vigorous overfishing and poaching without the opportunity of a lifeline to perpetuate. Repopulation has thus been severely curtailed, with human activities being the major contributory element to the demise of wild sturgeons.

It is of paramount importance and of the utmost urgency now to call for and to develop, engineer and implement strategies for a conservation culture to aid and abet this species’ recovery in their natural habitats.
In short: the sturgeon’s regeneration is our responsibility.

In response to concerns that trade of sturgeon products might be detrimental to the species’ survival, 23 species were entered into the “Appendices of CITES”, the Convention on International Trade in Endangered Species of Wild Fauna and Flora, the International Regulatory Body of worldwide endangered species. The Appendices of CITES represents an agreement between governments whose members mirror those of the United Nations ( U N ) . 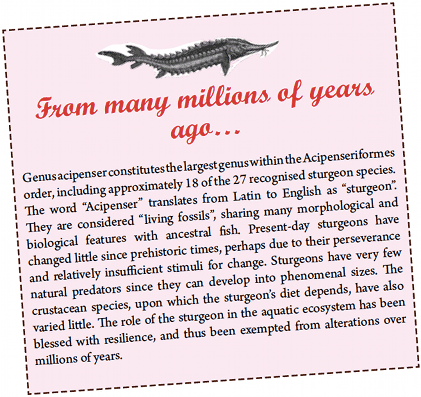 The Sturgeon’s CITES listing aims to reduce and eventually completely eliminate the illegal trade of caviar on the world market. All Acipenseriformes species are controlled by various regulatory and enforcement means, such as Quota Control, Permits, Traceability and Coded Labelling. It is hoped that these implementation and enforcement structures will strongly contribute towards the conservation of sturgeon stocks, but in particular will aid the survival of remaining wild sturgeon stocks in the Caspian Sea. It is the world’s largest landlocked sea and home to six sturgeon species, which collectively used to provide in excess of 90 per cent of the world’s annual caviar yields.

It all began with the beluga sturgeon as catalyst, being isolated as the Caspian Sea’s most affected and endangered species. This triggered during the following years a number of temporary import and export bans by both the US Fish and Wildlife Services and also CITES.

However, the continual decline of wild sturgeon clearly became untenable. This resulted in CITES taking the unprecedented step in January 2006 of suspending trading of all wild sturgeon fish and caviar, in particular, beluga sturgeon caviar from the Caspian Sea basin, the Black Sea, the lower Danube River basin, and the Amur River basin in China. A year later, despite applied relaxation quotas to a number of species, the suspension forged profound implications to connoisseurs’ and vendors’ perspectives on the ethics of wild caviar and its sustainability.

There are currently zero export quotas for wild sturgeon. Despite bans and the collapse in wild sturgeon, poaching and smuggling persists to a degree. It is envisaged that this “Zero Quota Status” will continue uninterruptedly. Sturgeon farming was first initiated in Russia. The early fish farms employed Russian techniques. Aquaculture plants are currently found all over Europe (ie, Spain, France, Germany, Austria, Italy, Hungary) and outside Europe in the US, the Middle East, South America, the Far East and China. The latter country, being subjected to far less stringent environmental controls, often tends to produce caviar termed unfit for consumption under EU regulations. Sudden chemical discharges often lead to partial or at times a destruction of a complete sturgeon farm.

Marketing and a certain amount of snobbery is crucial to the entire industry; the more elusive the supplies, in the case of beluga, the higher the kilogramme:price ratio. Some still prefer wild caught sturgeon caviar, even though with much-advanced farming techniques the difference in taste has now become virtually indistinguishable. With females in season, harvesting takes place between October and March.

For complete roe and meat purification, sturgeons are starved for up to eight weeks in freshwater clearing ponds prior to roe extraction. The extracted roe is almost solid, comparable to a semi-inflated tennis ball. It is only after salting that sturgeon roe may be called caviar. And the salt needs to do its work for at least four weeks, until the membranes of each egg have softened, making the caviar finally completely palatable. Opened receptacles showing excess liquid are always considered a flaw. Modern vacuum sealing methods cannot, however, always avoid the possibility of a number of eggs popping. Some roe will remain a little more resilient, whereas roe from other sturgeons tend to be slightly softer with the latter prone to produce a higher amount of breakage.

Aquaculture improvement techniques in natural environments have facilitated the repopulation of the following sturgeon species:

Huso Huso – The Beluga Sturgeon
This is the celebrated sturgeon species. A wild specimen was caught, measuring over 9m and weighing a massive 1,400kg. It carries steel-blue to grey and black skin markings with light ventral and white creamy bony scutes down its back. Its flesh and its most precious beluga caviar represent an attractive undertaking as the actual perpetuation of this rare species.

Acipenser Transmontanus – The White Sturgeon
Being the second largest species in the Acipenser family, this is an ancient, freshwater, bottom-dwelling feeding fish and characterised by a long and large cylindrical body, subconical snout and four beard-like barbels at the base of its head. Reaching maturity within 10 years, the Transmontanus produces flawless, large-sized roe in a solid dark-chrome appearance.

Acipenser Gueldenstaedtii – The Russian and the Diamond Sturgeon
This is a true representative of the Acipenseriformes family. Aquaculture offsprings are reared to an average of 1.25m and rank second in growth rate and longevity. The rare diamond variety has beautiful star-like markings but they are invariably lost, turning grey-black in colour during adulthood. The Gueldenstaedtii medium-sized roes bear a delicious buttery, aromatic flavour, featuring ample colouration choices from gold, olive green via hazelnut brown to anthracite.

Acipenser Baerii – The Siberian Sturgeon
The Siberian Sturgeon is the most popular and by far the easiest aquaculture species to breed. Resilient and tough, with a healthy and rapid rise to adulthood, this sturgeon will reach a maximum length of 1.2m in clean and comfortable aquaculture surroundings. The skin is brown-grey and black with the underside in contrasts of white. The end of its nose features a white tip. Siberian sturgeon caviar roes are of a medium size, typified by a deep-mahogany-brown colour with a velvety taste.

Acipernser Naccarii – The Adriatic Sturgeon
This sturgeon was present in the Adriatic Sea water of the northern part of Italy and, with upstream migrations into the rivers Po, Adige and Ticino, reached maturity over a period of nine years. Wild specimens grew up to 2m but usually only up to 1.5m. Its colouring on its back is greyish-brown, olive-brown or almost black, with flanks lighter and belly paler or whitish.

Acipenser Stellatus – The Stellate Sturgeon
This one is best known as the stellatus or starry sturgeon, and is easily recognised by its elongated nose and head. This part of its anatomy represents 25 per cent of its total length. This sturgeon keeps its beautiful markings throughout its life. It reaches a maximum of 1.5m in the wild but considerably less in an aquaculture environment. All stellate sturgeons are keen jumpers. Despite its smaller physical attributes, roe remains small and graceful, appearing in luminous metallic-grey and with a memorable, fresh sea-salt flavour.

Acipenser Ruthenus – The Starlet Sturgeon
The starlet is a slow-growing sturgeon of a very tolerant nature. In captivity it measures 0.6m-0.9m, reaching maturity over a period of 10 years. Distinctive features are white edge markings with lines along its back to the pectoral and front fins. The small and light blue-greyish roe sets it apart from the stellatus. 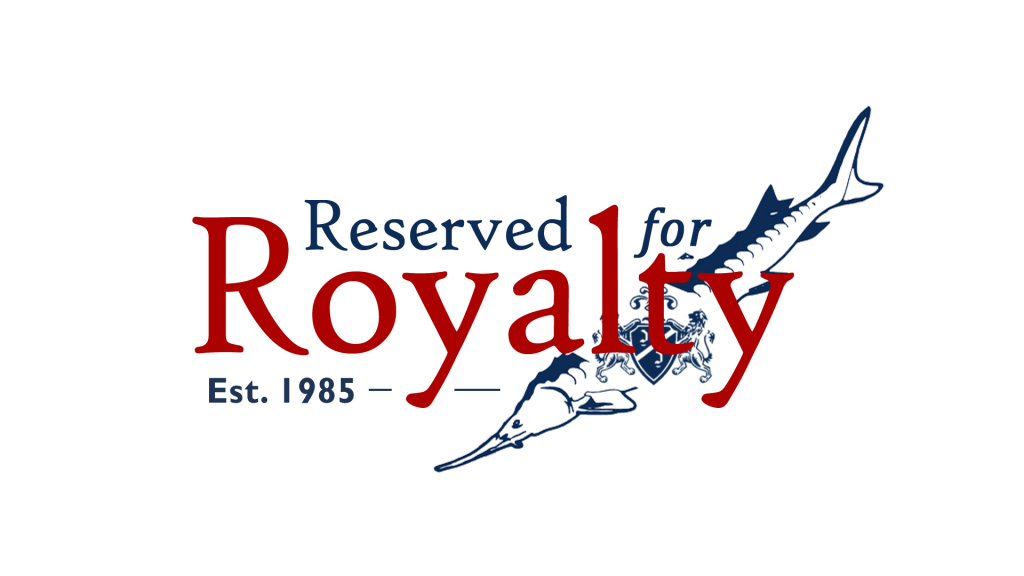